The topic of NFTs is currently being hotly debated. But what is an NFT anyway? And why are publishers like Ubisoft facing criticism for it? We clarify.

The terms “NFT“, “blockchain” and “crypto gaming” have been floating around the web for quite a while now. However, the topic has been particularly hotly debated in the past two years and has also made waves in the gaming scene.

Two well-known publishers, Ubisoft and Electronic Arts, have already integrated them into their games or plan to offer NFTs in their titles in the future. But what does NFT mean and what impact does it have on the games market? What criticism is there and is it justified?

In this overview, we clarify everything there is to know about NFT in gaming and explore the question of whether the topic could have a future. We also add current developments and news on the topic of NFTs & Co.

What does NFT mean?

The abbreviation NFT stands for “non fungible token”. Behind this term is a new concept that is intended to establish a more direct exchange between buyers and sellers via digital transaction platforms. In doing so, it is possible to acquire a virtual object in exchange for real money or even cryptocurrency and become the new owner or rightful owner.

Such a digital object or ownership is usually not copyable and can be, for example, a work of art, a piece of music, a movie or a digital content for a video game. The authenticity of an NFT is guaranteed by so-called blockchains, i.e. ostensibly forgery-proof strings of data records containing, among other things, transaction data.

In some NFT models, the new owner is the only person who can still earn money with the object after its purchase. In other cases, the original creator shares in any further revenue. NFTs are meant to bring back some autonomy to artists who have been prevented by unfair contracts and corporations from being paid fairly for their work. At least that’s the theory.

Where do NFTs already exist?

In practice, NFTs are still in their infancy. Especially in Europe, the topic is still quite unknown, but interest is constantly growing. Especially in the wake of the current cryptocurrency wave, which has grown during the pandemic, many people are seeing these digital revenue streams in a new light.

In fact, many well-known companies such as Microsoft, Nike, Gamestop, Ebay and many more have already spoken out on the NFT topic and have either already offered or at least planned to offer corresponding content. In the gaming market, however, interest in NFTs is divided into two different camps.

On the one hand, there are small, independent game studios that are hoping for larger sources of income through NFTs. For them, it’s the ideal way to approach the community directly and offer exactly the content they want.

On the other hand, there are the big companies and publishers who see the future or perhaps just big money in NFTs. Ubisoft recently received a lot of attention for its announcement that it would offer NFTs in its shooter “Ghost Recon: Breakpoint”. Exclusive equipment can already be purchased on the “Ubisoft Quartz” platform.

Ubisoft is also involved in the Blockchain Game Alliance organization and the Chinese software company Animoca Brands. The latter have already launched various blockchain games such as “F1 Delta Time”, “The Sandbox” or “CryptoKitties”. In doing so, the Chinese company works with various game developers and blockchain companies in which they own shares.

NFT development for video games, what does it consist of?

Publisher Electronic Arts, which oversees the popular FIFA game series among others, also envisions a future in the crypto gaming market. For example, it would make sense to offer exclusive trading cards for FIFA Ultimate Teams via NFTs on its own platform. In contrast to Ubisoft, however, EA is still a bit more cautious and is still waiting to see how interest in such content will develop in the future.

NFTs in the indie market

Another example of NFTs in video games comes from the quite controversial developer Peter Molyneux, who wants to create a completely new gaming experience with “Legacy”. In it, players can buy virtual plots of land and build businesses on them, which can be used to earn real money.

Even though the announcement was received with mixed feelings, many interested parties have already invested in it. The idea is innovative and interesting, but the game will have to be maintained by the developer studio in the long term.

What criticism is there of NFTs?

Even if the basic idea and the benefits of NFTs sound very positive at first, there is already a great deal of criticism of them. This can usually be divided into three main arguments:

Let’s go through these criticisms one by one. The negative impact on the environment by NFTs or their underlying technology cannot be dismissed, as many past NFT projects are based on cryptocurrencies like Ethereum and already leave a significant carbon footprint. But how do crypto transactions generate CO2 in the first place?

It is the CO2 emission, which is calculated based on electricity consumption. This is because every single, digital transaction costs electricity – in the case of Ethereum, this is the currently still massive use of graphics cards. However, trading with NFTs is not a one-time thing, but consists of several steps that all generate different amounts of CO2: the creation, the bidding, the withdrawal of a bid, the sale and the transfer of the NFT – all interactions require calculations in the respective blockchain.

Ethereum, for example, till recently used the “proof of work” method, which generates a lot of CO2. Now, however, after the “Merge”, this has been replaced by “Proof of Stake”, which significantly reduces energy consumption. According to its own information, Ubisoft relies on the more environmentally friendly variant with the Tezos blockchain – whose power consumption, however, still cannot be dismissed.

Bottom line: yes, NFTs hurt the environment, as blockchain technologies generate significant amounts of CO2. However, this is also true for other digital technologies, be it online banking or even online gaming. Resource consumption on the Internet continues to increase with each passing year.

The current run on NFTs is counterproductive in any case to finally meet the general goal of becoming climate-neutral one day – but in itself it is just another piece of the puzzle that will cause the overall global energy demand to continue to rise and once again makes it clear that new energy sources are needed.

The discussion about the value of NFTs is very subjective. For many, it is downright absurd to purchase a digital object for large sums of money. In “F1 Delta Time,” for example, a virtual “Formula 1” race car was auctioned off for more than $100,000. For that, you could already afford a very good new car in the real world, but here you “only” get a source code.

Furthermore, the question arises whether NFTs are so unique. After all, it is possible to simply take a screenshot of a digital work of art, which can then be distributed further. This would undermine the concept, even if copyright remains in place, of course. However, there is just a lot of room for abuse and fraud here.

Basically, the value of an NFT is determined by its demand. So, just like with many other products. If many people agree that a virtual race car is worth as much as a real car, then it is worth as much. However, the price debate is distorted by the current NFT hype, which is how such prices can come about in the first place.

Like cryptocurrency trading, this can also cause prices to plummet. Then the race car, which was previously traded for thousands of dollars, is suddenly only worth a fraction of that. Anyone who bids recklessly and does not pay attention therefore risks high losses when the NFT bubble bursts.

What is Play to Earn? – Enkronos

The concept of NFTs is meant to help artists generate higher revenue for their work. Those who previously received little attention for their art or had to share their income with a larger company can now take a different path. However, due to the hype and pressure from outside, many may feel pressured to enter the NFT trade even though they don’t want to.

In addition, the rights issue with NFTs is still somewhat fuzzy. The creator of a work still has the sole copyright, which also applies to digital art and normally cannot be transferred. So, by selling the NFT, he gives the right of use to another person.

Only if someone owns the “exclusive right of use”, no other person can use the work (not even the author). However, this is difficult to implement, especially on the Internet, where virtually every medium is seen, copied, and further distributed without it being possible to simply stop it.

If the topic is still controversial, the sale of NFTs also damages the reputation of artists and companies. In the case of “Stalker 2: Heart of Chernobyl,” developed by Ukrainian studio GSC Game World, the drama surrounding a particular NFT had serious repercussions:

The developers wanted to finance the further development of Stalker 2 by selling an exclusive character in the game, which was to be given the name and appearance of a real person. The concept was to be implemented with the help of NFTs. However, due to many negative voices from the community, the idea was scrapped just one day later. This hurt the “Stalker” brand, even though GSC Game World reacted quickly and decided in favor of the fans.

How Did NFT Bring Art and Technology Together? – Medium

Do NFTs have a future?

Whether the concept of NFTs really has a future is not so easy to answer now. What is clear, however, is that with every new announcement about NFTs, attention grows. In the process, two camps are emerging that hold opposing views: Those who see NFTs as the ultimate in digital and are willing to spend a lot of money on such content. And all those who consistently reject NFTs and persuade companies with their loudly expressed opinions not to take the decisive step after all.

In any case, NFTs are not mature yet. The first, quite successful blockchain games already exist, but they exist in too specialized a niche. For the masses, NFTs first have to be made palatable. Then the community will decide whether they will embrace the concept or not.

However, many still fear that big game studios will only develop their titles to make as much money as possible, and not to implement a creative vision. If the thought of in-game purchases, DLCs and NFTs influences the basic development of a game too much, creates unfair advantages over the non-paying community, or even turns into gambling, then this content should be viewed critically.

For the time being, however, the NFT and crypto gaming market remains an interesting experiment that could go through the proverbial roof or disappear into the basement at any moment. We will continue to follow the topic and report on it. 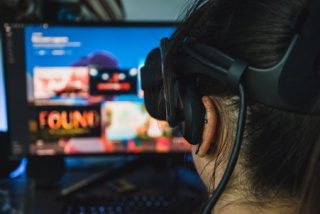