Smart contracts are a kind of algorithm for certain actions integrated into the blockchain code. When the established agreements that are spelled out in it are met, the sequence is automatically triggered.

For example, let’s take the simplest transaction – the process of buying and selling cryptocurrency between users. This transaction takes place according to the requirements of anonymity and is not regulated by the intermediary organizations that perform its control. This model is made possible thanks to smart contracts, which prescribe a detailed algorithm of the transaction between two users. This allows to exclude the possibility of fraud from both sides and conduct the transaction in a specific algorithm of consecutive actions.

5 steps to programming in Blockchain (Smart-Contract)

Smart contracts are a necessary element for enabling decentralized projects (DeFi, DApps, etc.), as they are systems without the support of regulatory authorities. In this case, smart contracts are used to ensure that conditional agreements are enforced in the correct algorithmic sequence.

The algorithm itself is prescribed inside the blockchain, so the rules for transactions and other manipulations cannot be changed and are binding for all participants.

The very first mention of digital contracts dates to 1996. Nick Szabo, an American scientist in the field of cryptography, proposed the use of smart contracts. The result of his idea was a prescribed algorithm for the digital currency Bit Gold, which is the predecessor of the well-known BTC coin.

At that time, the idea was too futuristic and wasn’t worthy of implementation. It lasted until 2008, when the world was presented with Bitcoin and its blockchain.

Nick Szabo’s concept was fully realized in 2013 on the Ethereum blockchain, which was based on modern smart contract technology. It allowed applications to be developed and run without new distribution registries. Because of this, ETH gained the title of the first blockchain with full integration of smart contracts technology.

Smart contracts are part of the blockchain software code and work directly within the network. They perform the function of the paper contracts we are used to, only in the digital field. The terms are not written in pen on paper but using mathematical algorithms and programming languages.

Just like in a paper contract, the terms are subject to mandatory execution. Only then will the transaction be realized, and the users will receive the conditioned result. Once the algorithm is completed and the transaction is correctly executed, smart contracts become part of the registry, entering the blockchain blockchain itself.

The basic principle of a smart contract is the complete execution of a conditional sequential algorithm.

Smart Contracts and Ethereum 2.0: The Most Detailed Explanation Ever

There are several basic types of smart contracts, which are classified according to different criteria:

Also, the degree of automation of the smart contract plays an important role. It indicates whether the digital contract can function on its own or whether an additional paper-based medium will be required.

During the development phase and after the official implementation of the Bitcoin coin, the blockchain was not supposed to integrate smart contracts technology. It was used to process data on transactions performed.

However, in the BTC blockchain, it is partially possible to implement smart contract technology in some areas of activity. Such digital contracts would be spelled out based on simplified logic functions.

Third, Ethereum allows the development of smart contracts, which will then carry out the process of generating new tokens according to the ERC-20 standard.

In many ways, the innovations of the Ethereum blockchain made it possible to noticeably simplify interaction between various platforms, services, and crypto purses.

Where smart contracts are used

Smart contracts have become actively used around the world and are gaining momentum every day. In many ways, this is due to several benefits that smart digital contracts offer. They allow to optimize and speed up many routine processes and reduce (or eliminate) the involvement of an intermediary party, which significantly reduces the associated costs.

Also, the use of smart contract technology eliminates errors that were possible due to human error. Therefore, in recent years, digital contracts began to be used in various spheres of activity, in addition to cryptocurrency.

Medicine uses a huge variety of information that can be lost, intermingled, or misused: patients’ medical records, examination and test results, prescription, and prescription of medications and much more.

All this data is used to treat people suffering from illnesses of varying severity, so any mistakes can cost lives. This enormous amount of information is difficult for ordinary people to structure and process.

Blockchain technology with the integration of smart contracts makes it possible to create a unified information base with the ability to fully automate the processes of transferring and approving materials, including confidential ones.

Transactions related to the processes of granting and repayment of credit funds are enormous. Application of blockchain technologies based on smart contracts allows to prescribe algorithms in the network code. Thus, payment history, security and fraud detection system, automatic lending, etc. are greatly facilitated.

In addition, smart contracts technology in lending optimizes control over the movement of assets with the ability to constantly monitor and reveal the status of the property that is left as collateral for mortgages.

All these factors, when combined, can greatly simplify the banking industry, and reduce the associated overhead.

An example of the integration of blockchain with smart contract technology in banking is the Spanish bank BBVA (Banco Bilbao Vizcaya Argentaria.

The new smart business with blockchain

Analysts at Horizon State have suggested that blockchain technology integration based on smart contracts can maximize the objectivity of elections and impartially assess votes. This is a thorny issue that often arises during elections with their voting mechanisms.

The use of smart contracts based on decentralized registries can solve many problems during election processes. They cannot be changed, violated, or neglected by the algorithm in their favor. Therefore, people will have more confidence in transparency and the need to participate in elections.

Smart contracts in the media sphere

People who produce their content in the sphere of art and intellectual property (music, painting, video shooting, photography, poetry, films, etc.) should receive a decent remuneration for their works, which, in turn, should have a copyright.

The application of blockchain technologies with the integration of smart contracts can automate most of the routine processes in the media space. They will enable correct crediting of payment funds, distribution of profit shares between the author and the production company. This will greatly speed up the processes and make them less costly.

Smart contracts in the Internet of Things

IoT (Internet of Things) is a new, promising direction with rapid development, which is gaining momentum every day. For its correct functioning, it requires a unified system that allows to combine electronic devices and personal gadgets. Blockchain technology based on smart contracts could be the ideal solution for these processes.

Smart contracts in the rental industry

The process of lending property, be it a car, a house or a kettle, consists of several simple sequences of a single algorithm:

This simple, routine process can easily be written into the blockchain code based on smart contracts. Such a solution would significantly reduce associated costs and save time.

A supply chain logistics system involves handling a huge amount of information about suppliers, recipients, shipping, routes, etc. If all this material is combined into one common blockchain system, it will greatly facilitate the processing of materials, eliminating possible errors and confusion due to human error.

And if any changes occur during planning, a new link will be added to the supply chain or a change in the value of a particular component of the system will follow.

One example of the successful integration of smart contract technology with the supply chain was the digital contract between S7 Airlines and Gazpromneft-Aero. The smart contract about aircraft refueling has made it possible to fully automate the processes of fuel supply planning and related calculations.

Clearing is a complex system of interaction between individuals or entities for non-cash settlements with conditional obligations on both sides. The processing of all processes consumes a great deal of people’s time and effort, as well as significant expenditures on transfer fees. All these processes are accompanied by a large amount of associated documentation, which is often prone to errors.

Integration of blockchain technology based on smart contracts will automate all calculations and record the results in a registry available to all participants.

Analysts at Santander InnoVentures have stated that the introduction of smart contract technology into the banking industry will reduce overhead costs by $15 billion to $20 billion in 2022.

The gambling industry (casinos, slots, poker, etc.) has a low user credibility. Many doubt that the system works honestly and suspect companies of outright fraud.

The introduction of blockchain in gambling will create a clear algorithm of consistent actions, which will be executed 100% of the time without the possibility of adjustments or changes. Such a solution will eliminate the human factor and, therefore, fraud in gambling.

An example of successful integration of smart contract technology in gambling is Xether platform, which allows its users to participate with ETH.

Already, many organizations are actively working to fix existing flaws in smart contracts technology. Analysts say that soon, the technology will be able to be fully legally justified, which will go a long way toward increasing the credibility of people.

In the coming years, smart contracts could replace much of the document-based transactions in finance. Many of the world’s leading banks are experimenting with blockchain technology and moving their routines to it.

The time is not far off when smart contracts will also be used at the government level to streamline reporting processes, documentation, etc. 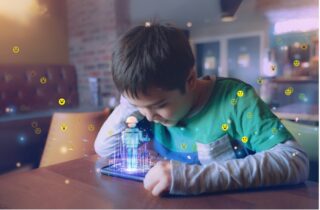